Newbies to Chicago’s suburbs are increasingly stowing cars and slipping into walking shoes.

No longer are McMansions, white picket fences and sprawling square footage topping suburban buyers’ most-wanted list. Instead, proximity to a suburb’s downtown and easy access to restaurants, schools and parks are priorities. For many, walkable suburbs reign supreme.

“Buyer demand has shifted from wanting to be situated in the suburbs, to homes in the urban core,” said Nathan Freeborn, real estate agent with realty website Redfin. “People are trying to get away from using their cars as much as they can.”

Mara Franken, her husband, David, and their children Matthew and Eva walk through their Glenview neighborhood. The family specifically sought a suburban home within walking distance of nearby amenities.

“We wanted to find a home that was close enough to the downtown to enjoy walking like we did in the city,” Mara Franken said. By foot, the Frankens can easily reach a library, train, four parks, a grocery store and a few restaurants.

“It almost feels like we’re in the city, with the benefit of having a yard and neighbors and a garage,” Franken said, noting that they checked the walk score — a measure of how walkable an area is — of houses before touring.

The shift toward more walkable suburbs started over the past two decades, thanks to planning efforts concentrated on creating mini-downtowns to revive traditional suburban centers, said Kheir Al-Kodmany, a professor at the University of Illinois at Chicago’s College of Urban Planning and Public Affairs.

For instance, Wheeling recently spent $110 million to create a 16.2-acre downtown, slated for completion in late 2018, which will include a 25,000-square-foot plaza and a 100,000-square-foot retail area that includes a movie theater, restaurants and more. And in downtown Glenview, a four-story mixed-use development featuring 138 luxury apartments wrapped up in 2014.

“These suburban downtown places offer alternatives to the city’s downtown, which is increasingly expensive, unaffordable, congested, noisy, crowded and polluted. As a result, the suburbs could offer the best of both worlds,” Al-Kodmany said. “Low-density, affordable, peaceful and comfortable living that is accessible to vibrant, busy social places.”

A 2017 study by the National Association of Realtors found that walkers span the generations. Sixty-two percent of millennials and 55 percent of those born before 1944 prefer walkable communities and brief commutes, even if it means living in an apartment or town home. And 53 percent of Americans would give up a home with a large yard in exchange for a home with a smaller yard that’s within walking distance of the community’s amenities, according to the study. That figure is up from 48 percent in 2015.

“We coined the term ‘surban’ for this trend, which is development that is bringing the best of urban to the suburbs,” Burns said.

The housing prices reflect the shift away from the larger suburban homes to the suburban downtown condos.

A larger home in the far-out suburbs that may have sold in 2003 for $700,000 could be seen on the market today for $100,000 less, while a home in a downtown suburban area developed just two years ago will have already gone up in price, according to Julie Dunne, a Barrington-based realty agent with Keller Williams Success Realty. 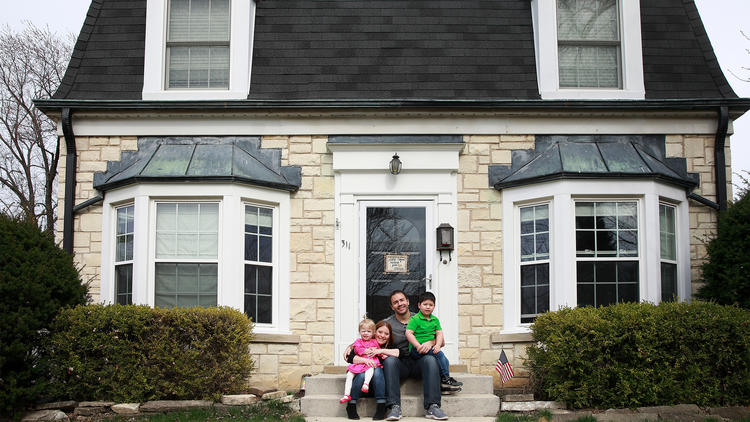 Some realty agents say young families moving from the city to the suburbs are among the top buyers seeking suburban dwellings with an urban feel. The Frankens fit the bill.

A 2016 study from realty site Redfin seems to support Dunne’s point. The study took into account more than 1 million home sales between January 2014 and April 2016 and found that homes with higher walk scores tend to have higher sales prices than comparable homes in less walkable areas. One walk score point can increase a home’s price by an average of $3,250. In Chicago, the study found an increase of one walk score point can bump a home’s price by $2,437.

Developers haven’t missed the trend, and suburbs throughout the Chicago area have transformed into construction zones.

Construction began last November at Park Place Glenview, a 26-residence development in downtown Glenview located in the 40,000-square-foot former village hall. It’s one block from an elementary school, and is within walking distance to Starbucks, Trader Joe’s, the Glenview Metra station, North Shore Country Club, a brewery and restaurants.

“People are excited to have the best of both worlds,” said Tom Drake, president of The Drake Group, builder and developer of Park Place Glenview.

Buyers want the schools and amenities that the suburbs provides, but they don’t want to give up anything the city has to offer either, Drake said.

Construction is also underway in Lake Forest’s downtown, where the luxury Kelmscott Park development is introducing a mix of 12 single-family homes, 42 condominiums and 111 apartments designed by architecture firm Booth Hansen. Kelmscott Park is within walking distance of the Lake Forest Metra station, grocery stores, restaurants, parks and boutique gyms. All the condo and apartment parking is underground because it’s supposed to feel like an in-town experience, said Tim Anderson, CEO and owner of Focus, the developer of Kelmscott Park.

Some realty agents say millennials and first-time suburban buyers are at the center of the downtown suburban living trend.

“The most common profile” says realty agent Freeborn, is this: “young families moving up from the city who are reticent to give up the walkability of urban life.”

This article originally appearing in the Chicago Tribune on May 17th, 2018